Huws Gray is the largest independent builders merchants in the UK, having grown through a combination of transformational acquisitions and developments during its four-year minority partnership with Inflexion from 2018. The firm was sold to Blackstone Group in 2021.

Huws Gray is the largest independent builders’ merchants in the UK. It was founded in 1990 in Anglesey, Wales, and at the time of the 2021 sale was operating from over 100 trading locations across Wales, East Anglia, the North West of England, the Midlands and Yorkshire, with over 1,800 staff. The business is a one-stop shop for small contractors or independent builders, offering comprehensively stocked branches to ensure that customers can get what they need when they need it. 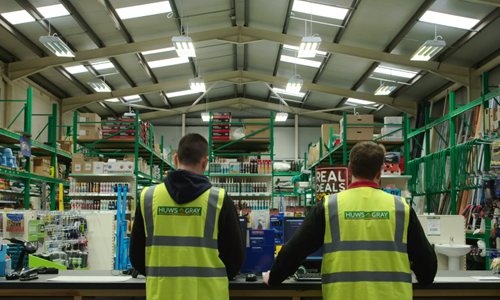 Inflexion made a minority investment into the business in 2018 to help step-change its growth via acquisition. Inflexion went on to help Huws Gray make over 16 acquisitions across the country, including the transformational acquisition of Ridgeons, an independently owned timber and builders merchants trading from 25 branches in East Anglia. This early acquisition significantly increased Huws Gray’s store base and broadened its national presence, making it the UK’s largest independent builders merchants.

Our extensive M&A experience supported management's buy-and-build strategy: Within six months of the original investment, Inflexion originated and executed the transformational acquisition of Ridgeons to double Huws Gray's revenues. Ultimately the partnership saw the footprint of the business nearly double to over 100 branches whilst more than doubling headcount from 800 to 1,800. Throughout the entire hold period, Huws Gray remained majority owned and led by the existing management team headed by founders John Llewelyn Jones and Terry Owen.

Inflexion has taken the time to understand our business and how we envisage its future. Unusually for a private equity firm, they were willing to take a minority stake, meaning we stay in control as we work together to accelerate our growth. The transformational acquisition of Ridgeons in the south helped us double in size overnight; had we remained independent, we’d not have achieved it. Inflexion gave us the confidence and support to pursue that.